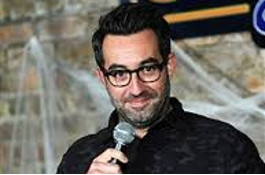 Headliner Tommy Pope is a comedian, writer and actor. On stage, Tommy works in an entirely unique style that seamlessly blends observational humor with a wry intelligent subtext. Only 3 years into his comedy career, Tommy won the title of Philly’s Phunniest at Helium Comedy Club in 2011 and has since been touring nationally. In 2012 he was named a New Face in the prestigious Montreal Just for Laughs Comedy Festival; in 2014 he was the winner of Big Sky Festival and appeared on Season 8 of Last Comic Standing on NBC; he was also a finalist for NY's Funniest, a distinction given during the NY Comedy Festival at Caroline's on Broadway. He is a co-founder and member of the BirdText comedy group which produces live shows and digital content and has been featured on VH1, NPR’s Fresh Air, Philadelphia Magazine, and National Lampoon. Tommy has also done voice work with Disney and was a featured character in the blockbuster “Planes.”

Tommy made his television debut in 2013 with Gotham's standup series, and has since appeared on Law and Order: SVU and Sex&Drugs&Rock&Roll. This year, Tommy stars in the new Comedy Central pilot Delco Proper— Tommy is the creator of the internet series on which the pilot is based, and co-wrote the pilot script.